A trip to the lap of Himalayas, literally - Part 3: Manali - The Valley of Gods

We reached Manali at unearthly hours of the morning after a rather tiring Bus journey. A quick, but powerful nap later, I was literally jumping up and down in pure delight after I found fresh snowfall right outside our balcony! The sight of snow-laden trees and rooftops draped in white was awe-inducing to our little eyes. We quickly geared up for a day of
snow-filled fun.

Our first destination was Solang , a snow capped valley nearby, well-known for its ski slopes. We drove through snow-soaked roads and rusty steel bridges over the rocky Beas river. It is in this very picturesque route that Kareena Kapoor rendered her perky moves to the peppy song "Ye Ishq Hai" from Jab We Met( one of my all time favourites :) ).
The stretch is flanked by apple orchards. Unlike what I'd imagined(a cornucopia of apples like the orchards straight out of those Vicco Ads!),  they were mere patches of bare naked trees casting a ghostly impression against the white backdrop. Sensing my disappointment, our guide explained that the orchards only start blooming at the start of spring and are generally ready for harvest by August-September. It means, most of the apples that we have all throughout the year, come from cold storage!

Solang Valley was every bit as beautiful as I'd imagined it would be. The panorama was exhilarating. The vast blanket of whiteness: a shadowless wilderness brighter than a sunlit cloud. It was like stepping into the realms of fantasy. What followed was reckless abandon! We tried Paragliding and Zorbing, devoured piping hot bowl of Maggi seated on plastic chairs that were planted on snow, tried on traditional Himachali outfits, made a cute little snowman, had more snowball fights, found childlike glee in sliding down on our butts from small slopes and when it got too crowded as people started following our cue, we found other slopes to slide on.

The following day, we woke up to a raging snowstorm. Though it meant that some of our plans would have to be shelved( we would be missing out on an adventurous rafting trip over the rocky Beas :( ),  snowfall was a sweet unexpected gift. Layered in extra warm clothes we walked into the shower of snow outside. There’s something magical about standing beneath the sky, gaze fixed upwards, hands outstretched, catching the snowflakes that fall softly on the ground. There’s a crispness in the air, like everything’s being made new. We savoured the experience till our hands grew numb from the cold.
Undeterred by the storm which by now, was showing signs of blowing over, we set out to cover the nearby touristy places. The visit to Naggar Art Castle is worth mentioning. The gallery wasn't yet open when we reached there and it was "We-Can-No-Longer-Feel-Our-Noses" cold outside! Before we could turn into frozen mummies, the kind guards on post invited us over to their little log cabin, where they had stoked up a smoldering fire in the central fireplace(Its called "Bokhari" in the local Pahadi Language) using logs from the surrounding forests. After we'd stayed long enough to make sure our noses were still where they were supposed to be, we thanked them and went on to check out the gallery. The Art Gallery houses artifacts from the life's work of the Russian Roerich family, mainly Nicholas Roerich. He was a prolific painter, writer, philosopher and archaeologist.(All in one lifetime?! Phew!). The patrician family had devoted their life to ensure protection of cultural legacy at a time when the surrounding world was imploding in itself, festered by wars and cultural decadence. It forced me to put things into perspective. Perhaps, in those darkest years of human race, people had too less to lose and the devotion to their chosen cause was too fervent to be doused. We, on the other hand, are so cocooned in our little nest of comfort and luxury that we while away our life without remorse. I now felt guilty about bickering over frivolous stuff the previous night( like who should get out of the warmth of the bed to receive the in-room order :P ).

My favorite part of the trip though, was the journey from Kullu to Manikaran. It had some of the most stunning views that I have ever seen! The roads are treacherous, narrow hilly paths winding through the mountains. But we were glad that our cab - Maruti Alto could maneuver it with surprisingly little effort. ( You don’t see these little, not so comfortable family vehicles much back in our big cities, but it’s apparently a big hit in these hilly regions due to this very reason! ).
The omnipresent Beas and Parvati rivers, now turgid from the unrelenting rains, kept us company all along; the gurgle of the river and the calls of the wind punctuating the bumpy ride. Nestled amidst these cloud masked mountains are little pristine villages untouched by the humdrum of the tourist cities. The handful aerie houses nest precariously on the edges of the lofty mountains. These little sleepy places where you wake up and walk into a flurry of clouds, where life moves in sepia toned stillness, they’re a paradise for backpackers. Tucked away behind these hinterlands, is the notorious village of Kasol, cited to be the unofficial drug capital of India, the land of Cannabis. We made a mental note to stop by one of the various Restos of this largely Israeli populated town, hoping to catch some puffing grass conversations. (Sadly, it never happened).
We got to witness the sinister side of it all, the dangers lurking beneath the veil of paradise when mother nature decided to wrath her fury. We were visiting the famous Gurudwara in Manikaran when our guide called up to inform us that we'd have to cut our trip short since the constant rains had caused major landslides and almost wiped off a small village nearby. Later on our way back, we actually got stuck in one. Large boulders had rolled off a scree slope, blocking the road between Kasol to Jhari. It took almost an hour to clear the mess and resume the traffic. The houses nestled on the mountains no longer looked so idyllic now! 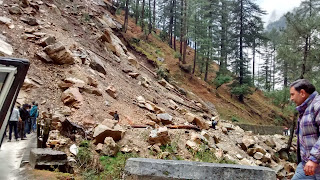 On the last day of our trip, we took a whistle-stop tour of Manali. A few temple visits: Vashisht temple, famous for hot water springs ( which sadly have been converted to squalid, public bathhouses now), a temple devoted to Hidimbadevi, wife of Bheema and a small shrine dedicated to her son Ghatotkacha not far away from there. We did the customary spin of Buddhist prayer wheels that said  "Om Mani Padme Hum" at a buddhist monastery, strolled around Manali's old Bazar, ate hot Jamuns in the rain, took a leisurely walk in a nearby park covered by a dense canopy of conifers.


This had been such a gratifying trip. We'd lived some of our earliest fantasies, checked off quite a few things on our bucket list, interacted with people whose culture and lifestyle were radically different from ours and made beautiful memories. The feeling of having to return soon that we'd been trying to repress for so long, surfaced again. With a resigned sigh, I switched on my phone and this is what Uncle Google had to say: 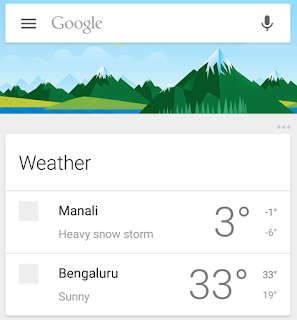 From icy idyll to sweltering wretchedness!

Email ThisBlogThis!Share to TwitterShare to FacebookShare to Pinterest
Labels: Travel